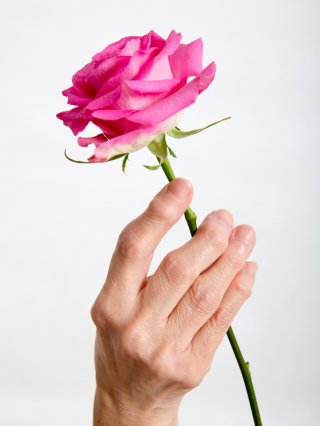 Rheumatism, also known as Rheumatic Disorder, describes a set of painful conditions regarding the musculoskeletal system including joints, muscles, and bones. Typically associated with rheumatism is a significant functional impairment, greatly reducing the patient’s quality of life.

An inflammation of the joints caused by the body’s own immune system is the central symptom of rheumatism, which includes more than 400 singular diseases (e.g., rheumatoid arthritis). The initial painful swelling causes the tissue to grow and results in deformed joints, which ultimately lose their function completely.

Despite intense research, the mechanisms leading to rheumatism are poorly understood. Genetic predisposition is known to be associated with the body’s immune reaction to its own joint tissue, especially in rheumatoid arthritis. This is an autoimmune disease, in which the immune system is directed against the body’s own joint tissue.

First and foremost the immune reaction to the tissue must be inhibited in order to reduce the patient’s pain and avoid further damage to the joint. This is achieved via immuno-suppressive and anti-inflammatory drugs as well as so-called “biologicals”. The medication can greatly reduce pain and slow down the destruction of the joint.

As a supportive measure, physiotherapy aims to strengthen the muscles surrounding the joint and trying to preserve as much functionality as possible. It is limited by acute states of the disease that require physical therapy to only gently move the joints. In some cases physical therapy has to be stopped temporarily.

In the context of an occupational therapy, lost skills are relearned or further skills are supported to enable the affected patient to live independently for as long as possible.

In case all three lines of therapy fail, surgery is the last resort in order to avoid irreversible damage to the musculoskeletal system. Inflamed and dysfunctional tissue and bone are removed, potentially granting the patient a few years without symptoms. In the later stages of rheumatism a joint prosthesis and eventually stiffening of the joint is necessary. However, these invasive surgeries also bear risks for the patients.

Both Mesenchymal Stem Cells (MSC) and Stromal Vascular Fraction (SVF) are extracted from the patient’s own fat tissue and provide a promising new means for the treatment of rheumatism. For example, rheumatoid arthritis has already been treated successfully with stem cells in studies.

Stem cells are the precursor cells of all cells in the human body. Mesenchymal stem cells in particular act as natural modulators of the immune system and stimulate the regeneration of tissue and blood vessels via cytokines. Given that rheumatism predominantly results from a faulty immune response, these stem cells seem to be a natural remedy since they simultaneously regulate the immune system and trigger repair mechanisms in the areas affected.

The stem cells required for the treatment are isolated from a small amount of the patient’s own body fat that is harvested by liposuction. During the procedure the cells are injected into the parts of the body suffering from rheumatism in order to take their regenerative and anti-inflammatory effect on the surrounding tissue. The entire procedure can be done in local anesthesia on an outpatient basis.